Hockey Handlez Announce Partnership for 3-Stars of the Game

Danbury Ice Arena in Danbury, Connecticut, has announced a partnership with Hockey Handlez. This agreement will connect on a promotional program with the soon to be announced Minor League Hockey team.

Hockey Handlez is the official sponsor the 3-Stars of the Game. Following each home game at the Danbury Ice Arena, based on performance and vote by the media – 3-players will be selected as the #1, #2, and #3 star of the game. The #1 star will receive a gift package from Hockey Handlez.

The Hockey Handlez Go Green mission is to make customized, high-quality, hand-crafted products from broken hockey sticks which would otherwise be thrown out. Their featured item is the 3 piece Grillset, which includes a fork, tongs and spatula-equipped with a bottle opener, meat tenderizer and serrated edge.

Hockey Handlez Founder Mike Porzio commented, “Our market is the hockey family and while we sell our product globally, as a Bethel, Connecticut based business we couldn’t think of a better building to call home than the Danbury Ice Arena. I’m looking forward to meeting the fans and not only improving their burger flip, but their wrist shot as well.”

In addition, as part of the promotion, fans will get to hear from the players on the Danbury professional hockey team about their favorite grilling recipes and grill master techniques. 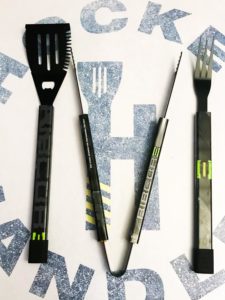 Hockey Handlez‘ mission is to make customized, high-quality, hand-crafted products from broken hockey sticks which would otherwise be thrown out and end up in landfills. They promote sustainability in the hockey community that has a growing number of people, players and coaches all dedicated to making hockey an environmentally friendly and sustainable sports environment.

The Danbury Ice Arena is a multi-purpose arena in Danbury, Connecticut that can seat about 3,000. The Danbury Ice Arena will be home to the the new Danbury Hattricks hockey team with Premier Hockey Leagues. Plans are in the works to expand the entertainment offering as soon as this summer, and professional hockey will be ready for the upcoming season.