Meet the Coach at TK’s

13
May
Posted by Danbury Arena
Category:
No Comments 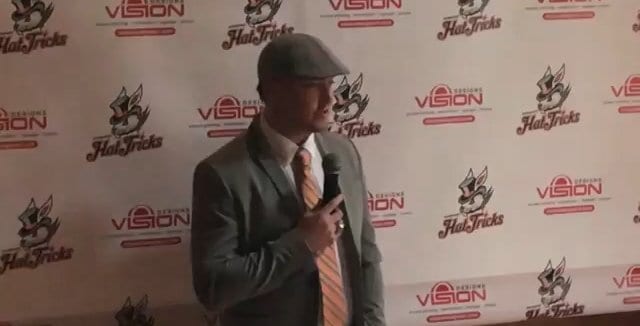 The event is open to all Danbury Hat Tricks fans and will feature complimentary wings and beverages. TK’s features over 76 different flavors of wings – you can’t beat that – come on down!!!

Fans will have a chance to meet McCreary and hear about his plans for building the roster and some of the players who will be coming in to play for the Hat Tricks.

McCreary commented, “I’m truly overwhelmed and humbled by the response I have received from the fans in this city. I also have heard from numerous former players who played in Danbury and they all echoed the same sentiments – it’s one of the most passionate groups you’ll ever see. I’m looking forward to the 22nd. I think they’re going to like how we are going to put together a Danbury style team in this building. It’s going to be a tough place for the visitors to come into.”

On this night, there is a potential for a Game 7 of the Eastern Conference Finals between the Boston Bruins and Carolina Hurricanes.

For more information on TK’s American Café in Danbury, check them out at www.tksamericancafe.com.

For more information on the Danbury Hat Tricks,  check out www.danburyhattricks.com or call at 203-794-1704.